Accelerating together towards a Circular Economy: HCEW2018

Living in a densely populated delta below sea level, the Dutch were forced over centuries to develop extensive knowledge and experience in finding high quality, sustainable and affordable solutions to protect delta areas and enable delta life. The Netherlands is now one of the regions in the world where the circular economy is leaving the conceptual phase and taking of. Their history with water turned Holland in a living lab and Circular Hotspot.  The Dutch hope that their innovations can be adapted as solutions for global challenges everywhere. They know they cannot do it alone and that is why they set up the Holland Circular Economy Week (HCEW2018). Altogether over 500 persons attended this week, coming from more than 20 countries. It was a wonderful mix of Industry, government bodies, knowledge Institutes and NGO’s. The new Holland Circular Hotspot foundationtogether with the Ministry of Infrastructure & Water Management, The Netherlands Enterprise Agency, Rijkswaterstaat and supported by Rabobank, Philips, Renewiand the C&A Foundation, had set up an impressive 4 day programme.

The welcome reception for the foreign delegation at the Peace Palacewas a symbolic start. General Director Erik de Baedts explained that working on Circular Economy (CE) is not only a very sensible thing to do from both economic and environmental sense but will also contribute toward the objectives of the Peace Palace. If we create more jobs, if we can feed the world, if use resources much better, if we preserve natural capital and give equal opportunities to the next generations the likelihood of peace is far greater. 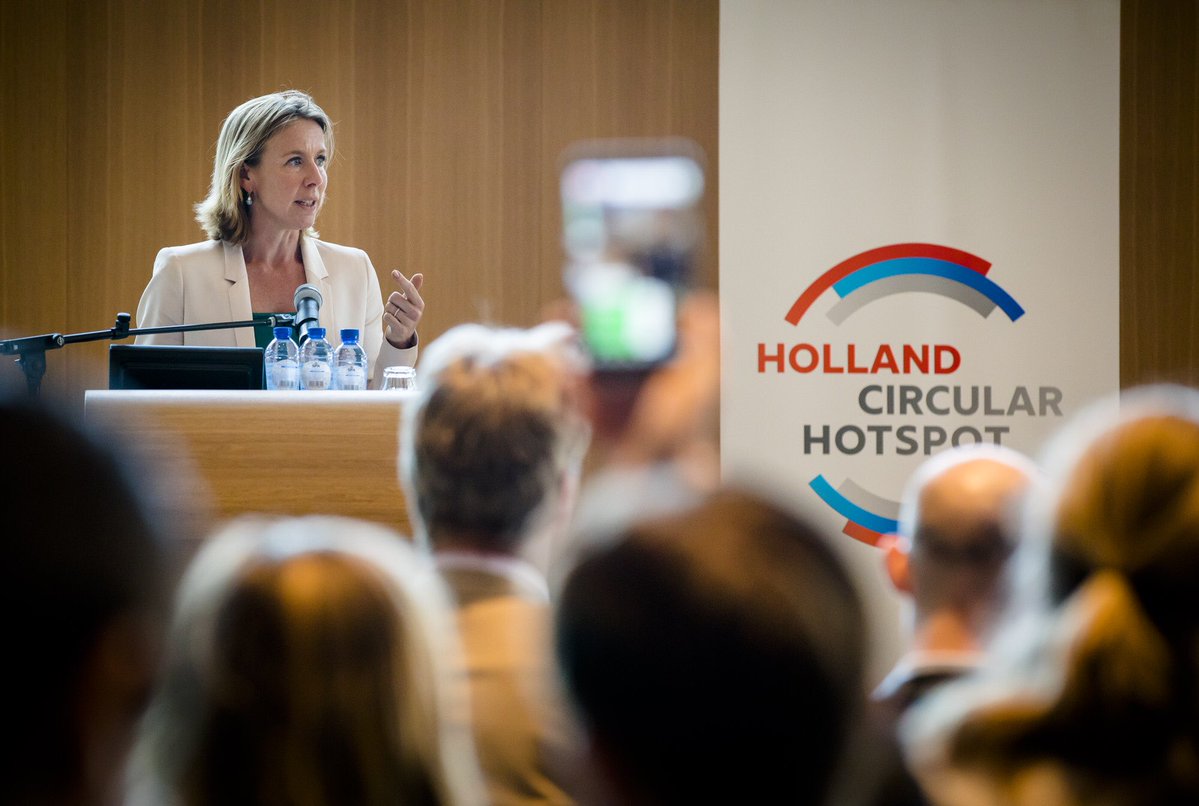 The strongly commited Dutch Secretary of State for Infrastructure and Watermanagement Stientje van Veldhoven gave a glimpse of upcoming measures of the Dutch government towards more circularity.

She said to be happy with the recent EU proposal aimed at fighting single use plastics and didn’t want to wait finalisation but start a Dutch Pact geared at plastic cutlery, straw and cups. She furthermore hinted at extending extended producer responsibility for example for clothing, furniture and disposables.

Eco-design, knowledge exchange and international collaboration were highlighted by the Secretary of State as crucial elements in the circular transition. 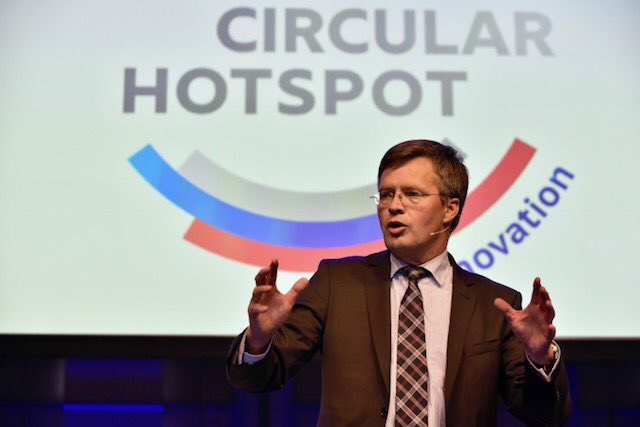 “CE is all about collaboration in the value chain and together closing the loop” (Bas Blom, Renewi)

You can’t just copy circular idea’s, you have to adapt them to your local situation (Ladeja Godina Kosir, Circular Change)

“In 2020 we 25% of our turnover will be circular” (Hans de Jong, President of Philips Netherlands)

We have seen the strong government support and personal involvement from Secretary of State Stientje van Veldhoven. Mrs van Veldhoven was in fact speaking for all members of the Dutch government when it comes to the Dutch ambitions to become fully circular in 2050.

A CE doesn’t come by itself. In the workshops the Dutch showed their interventions, insights and tools to come to a Circular Economy. Not to preach but to learn from the other countries and exchange ideas how private companies, government, scientist, NGO’s can work together to accelerate CE all over the world.

Guest enjoyed a circular fashion show where sustainable production is key at #HCEW2018organized by Dutch Awearness. 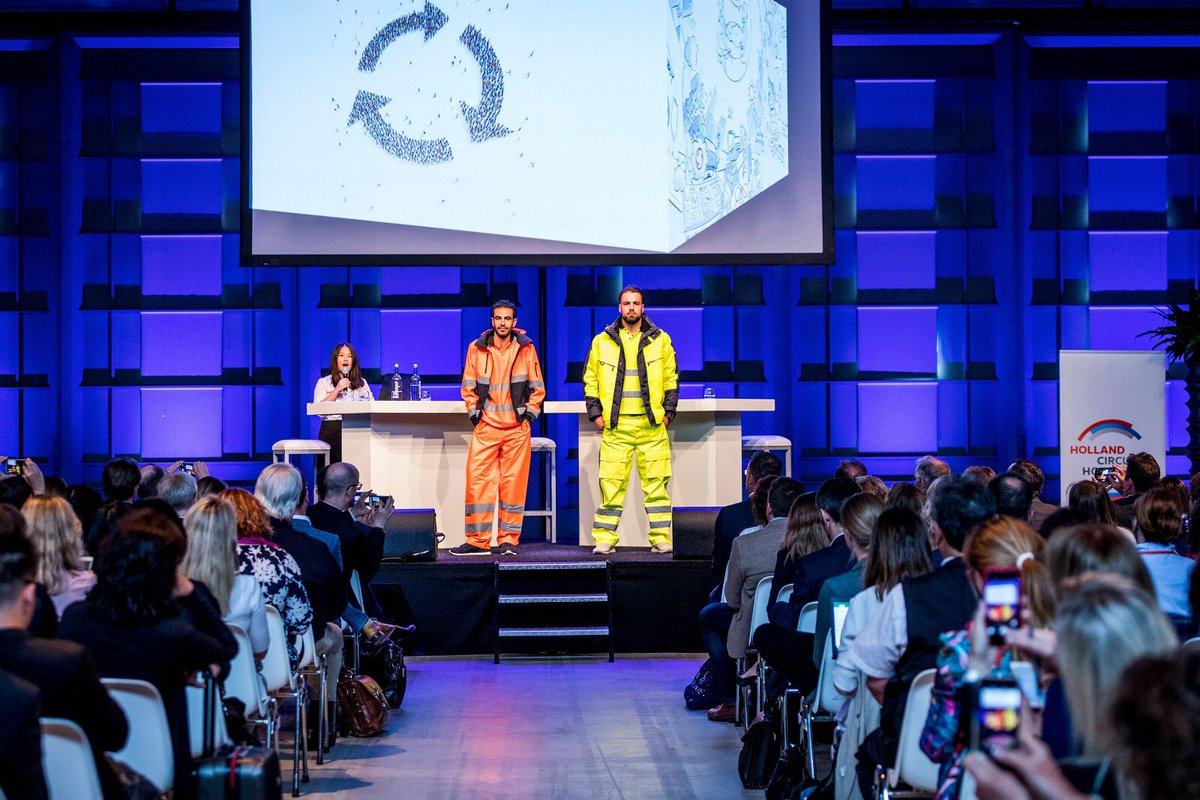 On Wednesday, our foreign guests went on excursion to see circular economy in action. They engaged with entrepreneurs that walk the talk and shared their best practices, their passion but also their hard-learned lessons.

A video impression of the companies visited can be found

During the HCEW2018 the latest circular literature was exchanged as well.

In the inspirational setting of C-Beta  Guido Braam, symbolically handed over the English translation of “Circular Route”, a roadmap for a circular business model to Freek van Eijk, CEO of Holland Circular Hotspot. 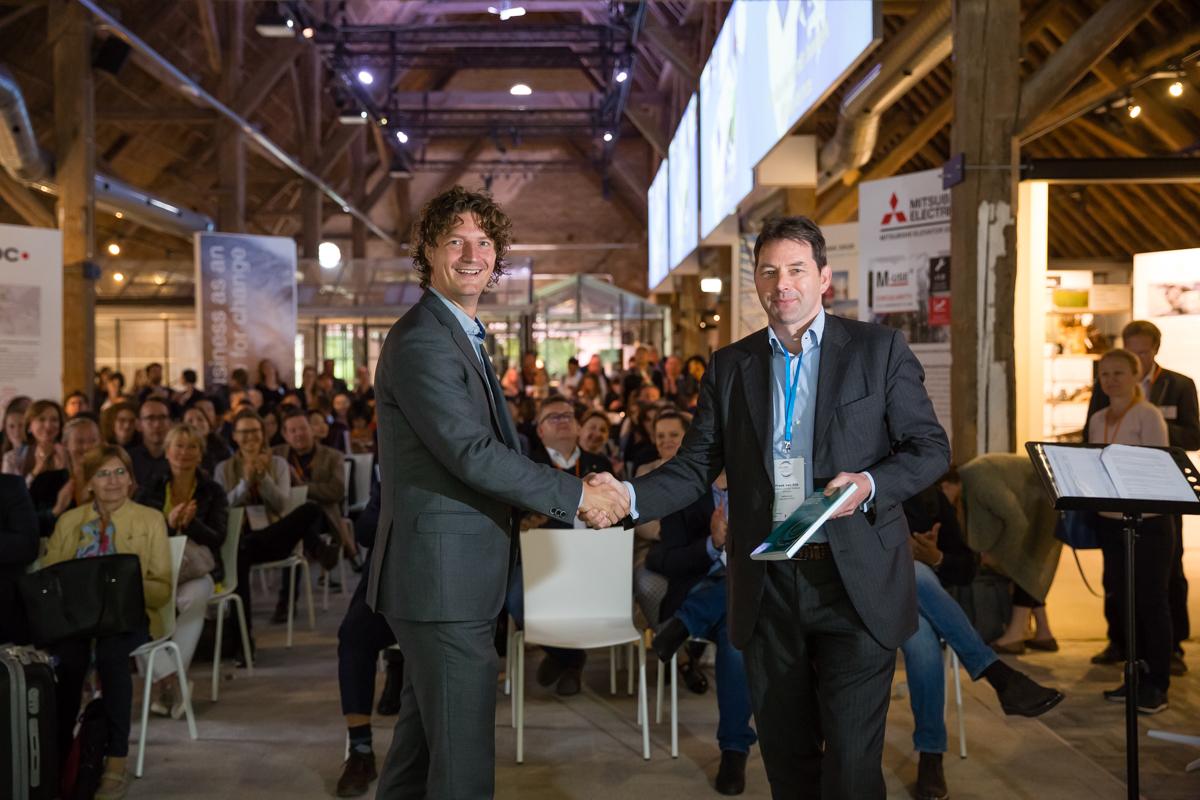 Also the second edition of magazine Circular is Going Globalwas launched. With over 40 new Dutch showcases it gives an impression of the diversity of sectors and parties involved to create circular solutions. 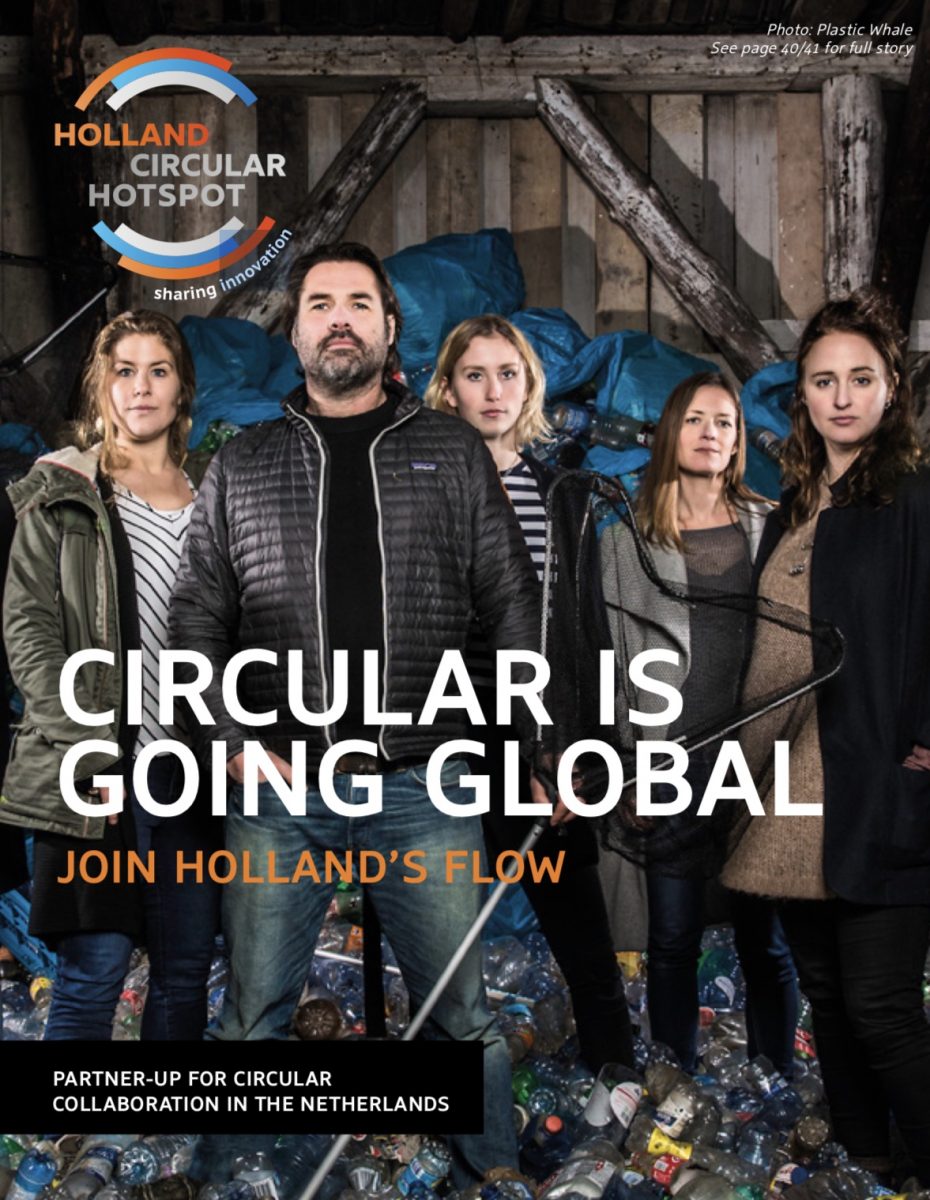 There is an urgency to act! A conservative estimate for Holland is that the seawater level will have risen one meter by the year 2100. The Dutch can cope, at a price. But now imagine that in 2050, 80% of world population will be living in a delta area. Can the world cope? We have to make CE actionable!

To make CE actionable a Match Making Day was organized by EENin the Innovation Center of Rijkswaterstaat called LEF. Lef is Dutch for courage and guts. A quite appropriate name considering that the transition to a circular economy requires a system change, a breakthrough in thinking and acting patterns. The organisers were quite pleased with the number of appointments. In between sessions start-ups like Closing the Loop, Black Bear Carbon, SuperUse Studio’s, Phario, Iskraemeco, Zero Waste Scotland, Deko Eko, Greentom, Ecorand Access Material Exchangepitched their circular cases to the participants.

Also the companies Ecor and Eyelevel signed a Letter of Intent to work together on development of circulair retail products. 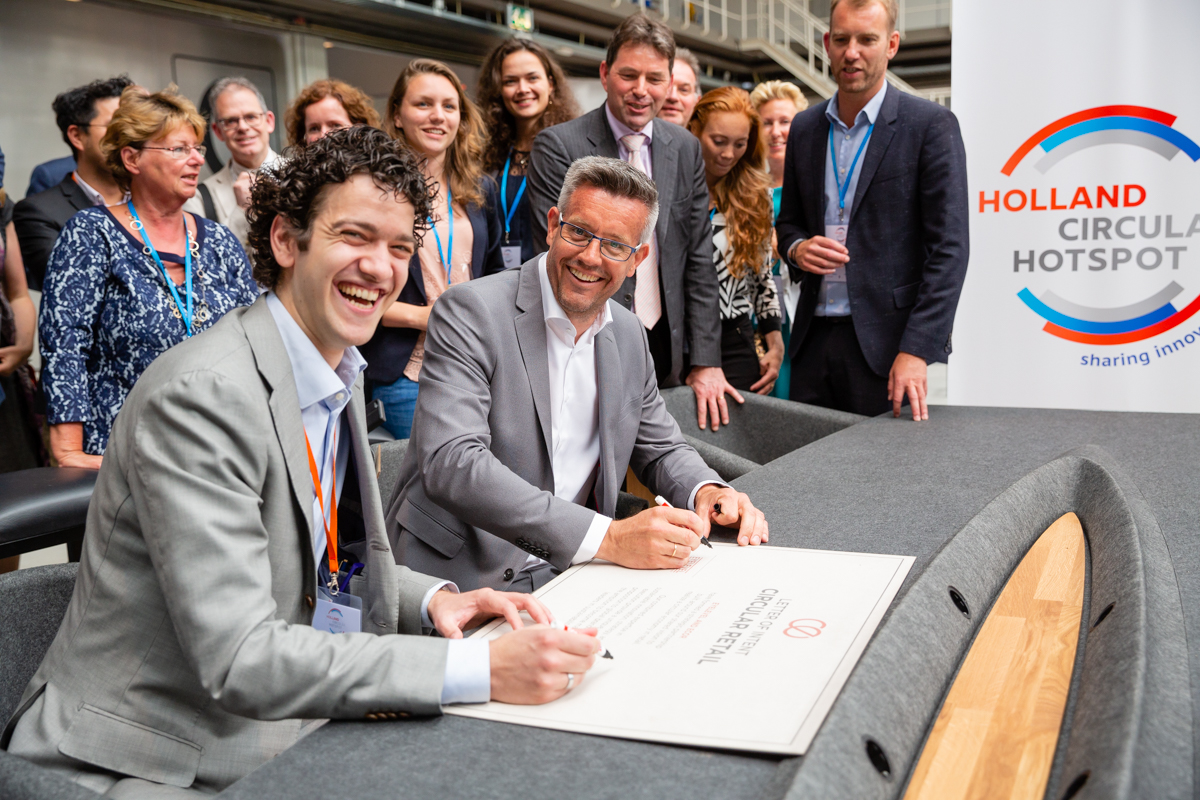 As a note from the author: The Dutch are collaborating since the Middle Ages in the struggle against water. I believe they can truly brand the Netherlands as a Circular Hotspot or a Sustainable Urban Delta. Circular Economy and Smart and Sustainable City solutions can be just as powerful a label for Holland as Water Management but with a much higher market potential.

The next event, this time organized by Zero Waste Scotland, will be Circular Economy Hotspot Scotlandfrom October 30 to November 1, 2018. It is a good place to continue sharing circular innovations, co-create and cooperate. 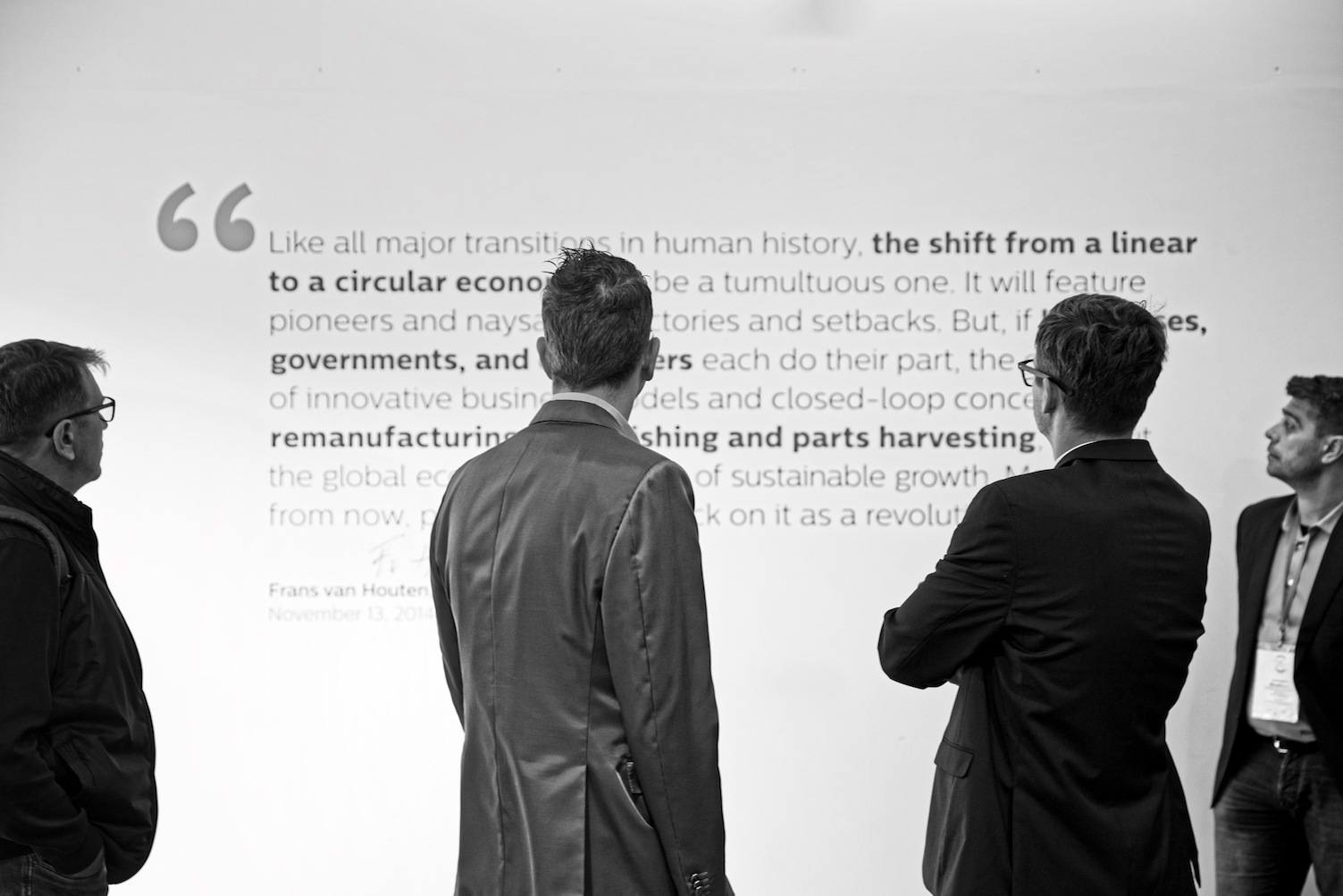